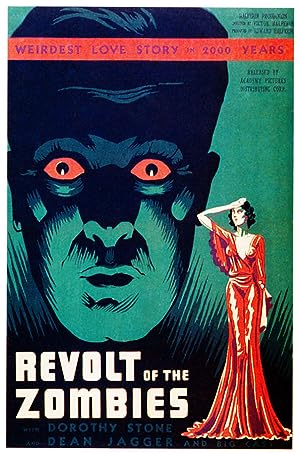 How to Watch Revolt of the Zombies 1936 Online in Australia

Where to watch Revolt of the Zombies

What is Revolt of the Zombies about?

On the Franco-Austrian Frontier during WW I, an oriental priest, chaplain of a French colonial regiment, is condemned to life imprisonment because he possesses the power of turning men into zombies. As the priest,in his prison cell, is preparing to burn the parchment containing the location of the secret formula, Colonel Mazovia kills the priest and takes the partially-burned parchment. Fade to after the war to an expedition of representatives from all the Allied countries (only those with colonial interests it appears) being sent to Cambodia to find and destroy forever the Secret of the Zombies. The group includes Colonel Mazovia (somewhat akin to sending the fox to guard the hen house); a student of dead languages, Armand Louque; Englishman Clifford Grayson; and General Duval and his daughter Claire. Armand falls in love with Claire, who accepts his proposal of marriage in order to spite Clifford whom she really loves. Later, when Claire, following an accident, runs to Cliff for comfort, Armand breaks the engagement, leaving her free to marry Cliff. Further accidents, caused by Mazovia, results in the natives refusing to work and the expedition returns to Pnom Penh. Armand fins a clue which he had overlooked before and returns to Angkor against orders. After viewing an ancient ceremony at the temple, Armand follows one of the servants of the high priest out of the temple, through a swamp, to a bronze doorway. When the servant leaves, Armand goes through the door to a room paneled in bronze, with an idol holding a gong in one hand in the middle of the room. He accidentally strikes the gong, and a panel in the wall opens revealing a small metal tablet. He translates the inscription and realizes that it is the secret for which they have all been looking. He alone now has the power to make zombies out of people, beginning with a practice run on his servant before taking up that little matter of the fickle Claire. Armand is not one to be trifled with.

Which streaming providers can you watch Revolt of the Zombies on

The cast of Revolt of the Zombies