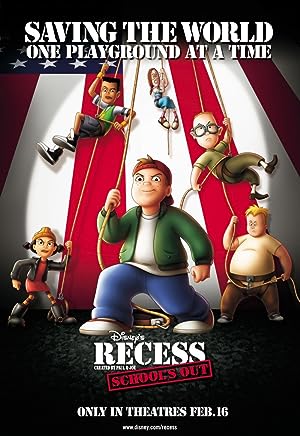 How to Watch Recess: School's Out 2001 Online in Australia

The cast of Recess: School's Out

What is Recess: School's Out about?

It's the most exciting time of year at Third Street Elementary-- the end of the School Year! But boredom quickly sets in for protagonist TJ Detweiler, as his friends (the other 5 protagonist children) are headed for Summer Camp. One day, while passing by the school on his bike, he notices a green glow coming from the school's auditorium. This is the work of the insidious ex-principal of Third Street, Phillium Benedict and his gang of ninjas and secret service look-alikes! Benedict is planning to get rid of Summer Vacation using his newly-acquired Tractor Beam, which he stole from the US Military Base in an effort to raise US Test Scores, and it's up to the Recess Gang to stop him! In the end, TJ and the gang, with the help from the other students, Principal Prickly, Ms. Finster and the other teachers, destroy the laser, Benedict and his henchmen are arrested, and the kids (TJ's buddies) decide to spend their Summer with TJ.

Where to watch Recess: School's Out