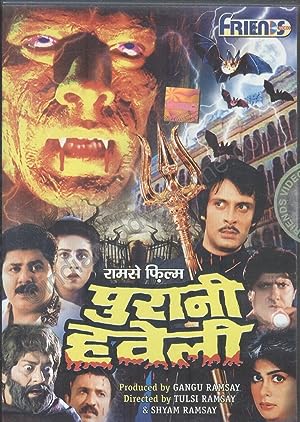 How to Watch Purani Haveli 1989 Online in Australia

The cast of Purani Haveli

What is Purani Haveli about?

After the passing away of her parents, Anita Kumar now lives with her paternal uncle, Kumar; his wife, Seema; and Seema's brother, Vikram. The family's business is taken over by Kumar, who uses some money to buy an old mansion deep in the countryside of Rana. Seema would like Anita to marry her brother, but Anita has already given her heart to Sunil, who runs a photo studio and is poor. This does not go over well with the Kumars, and they forbid her to see Sunil anymore. Then, when Kumar goes to take possession of the mansion, Anita's friends Shobha and Anand ask her if they can visit the mansion and also invite Sunil secretly. They also invite several other friends, including Sunil's assistant Manghu and travel via a bus. What the group does not know that is the mansion holds an evil secret, and that beneath the mansion, locked in a dungeon by its very own biological father, lies a monster, evil beyond imagination--and its primary diet is human meat!!

Where to watch Purani Haveli