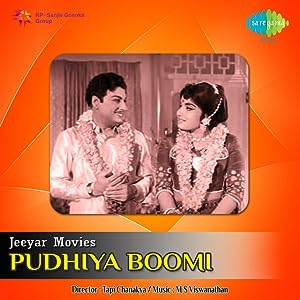 How to Watch Pudhiya Bhoomi 1968 Online in Australia

Where to watch Pudhiya Bhoomi

What is Pudhiya Bhoomi about?

A successful surgeon Kadheeravan (MGR) is kidnapped one day by henchmen of dreaded dacoit Kanakeyam (Nambiar), and led to a secret location to treat their ailing boss. After fixing up the patient, Kadheeravan escapes, but crashes his car and ends up unconscious in a remote village. He is nursed back to life by Kanamma (Jaya), who he eventually falls in love with, and moves to the village permanently for. Neither of them know that Kanamma is the dacoit's daughter... Remake of Shakti Samanta's Saawan ki Ghata, this has some hardcore nationalistic bombast, not surprisingly made at a stage when MGRs political career was about to fly.

Which streaming providers can you watch Pudhiya Bhoomi on

Here is the comprehensive list of streaming providers that will show Pudhiya Bhoomi in Australia. If Pudhiya Bhoomi will appear with other providers further down the line, this table will be updated.

The cast of Pudhiya Bhoomi