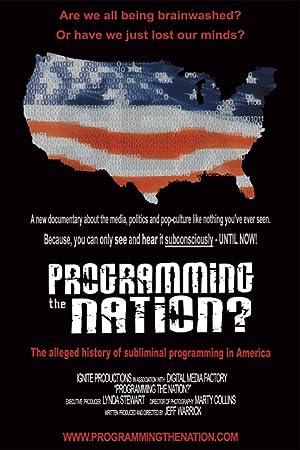 How to Watch Programming the Nation? 2011 Online in Australia

The cast of Programming the Nation?

What is Programming the Nation? about?

According to many authorities, since the late 1950's subliminal content has been tested and delivered through all forms of media, at an increasingly alarming rate. "PROGRAMMING THE NATION?" examines the purported uses, influences and potential subconscious side-effects of what's going on beneath the surface of advertising, film, music and political propaganda. Even the US military has been accused of using this technology in their Psychological Operations Unit, (PSY OPS) campaign. This socially relevant documentary not only traces the history of this phenomenon, but seeks to determine the validity and potential threat that may or may not exist. Do you ever find yourself doing or buying things without any conscious reasoning? Why has consumer debt in America risen over 50% since 1990? How is it possible that the United States consumes about 25% of the world's resources while only making up 4.5% of the world's population? Are we all part of an elaborate scheme which has been programming the nation? Decide for yourself...

Where to watch Programming the Nation?