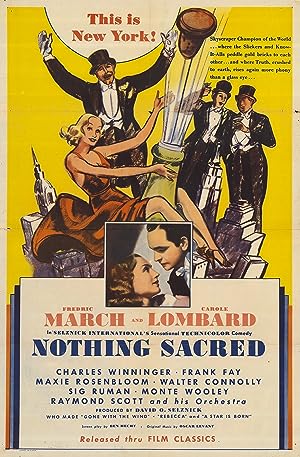 How to Watch Nothing Sacred 1937 Online in Australia

What is Nothing Sacred about?

Hazel Flagg of Warsaw, Vermont receives the news that her terminal case of radium poisoning from a workplace incident was a complete misdiagnosis with mixed emotions. She is happy not to be dying, but she, who has never traveled the world, was going to use the money paid to her by her factory to go to New York in style. She believes her dreams can still be realized when Wally Cook arrives in town. He is a New York reporter with the Morning Star newspaper. He believes that Hazel's valiant struggle concerning her impending death is just the type of story he needs to resurrect his name within reporting circles after a recent story he wrote led to scandal and a major demotion at the newspaper. He proposes to take Hazel to New York both to report on her story but also to provide her with a grand farewell to life. She accepts. Wally's story results in Hazel becoming the toast of New York. In spending time together, Wally and Hazel fall in love. Hazel not only has to figure out what to do about her relationship with Wally, but also how to conclude her now very public story, which all of New York expects will be a public and imminent death. Others, however, may conclude the story for her.

Where to watch Nothing Sacred

Which streaming providers can you watch Nothing Sacred on

Here is the comprehensive list of streaming providers that will show Nothing Sacred in Australia. If Nothing Sacred will appear with other providers further down the line, this table will be updated.

The cast of Nothing Sacred

Nothing Sacred is a great Comedy movie, we’ve selected several other movie options that we think you would like to stream if you have watched Nothing Sacred

Nothing Sacred is a great comedy show, we’ve selected several other show options that we think you would like to stream if you have watched Nothing Sacred