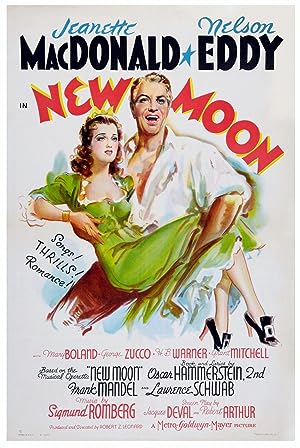 How to Watch New Moon 1940 Online in Australia

The cast of New Moon

What is New Moon about?

Marianne de Beaumaniour is on her way to New Orleans from Paris to inspect the plantation she inherited from her uncle. On the ship with her are bondsmen, that are to be sold for slavery. Charles, Duc de Villiers, a political enemy of the king, is also aboard posing as a bondsman. Charles is bought by Marianne's plantation manager and she is quickly taken by Charles' charm. Marianne soon discovers Charles' true-identity and she sets him free, before the French officers find him. Marianne decides to sail back to Paris with the Police Captain on the ship, 'New Moon', but they must first stop at Martinique. After Martinique, the ship is invaded by pirates. Marianne is shocked to see that Charles is the leader. That night, a fierce storm occurs, and everyone is ship-wrecked. Now, Charles is the leader and the fun begins...

Where to watch New Moon