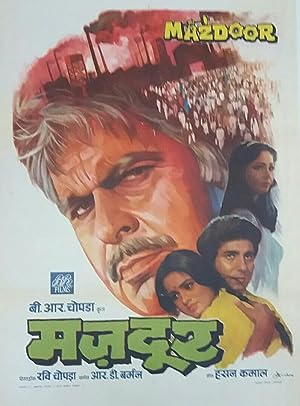 How to Watch Mazdoor 1983 Online in Australia

The cast of Mazdoor

What is Mazdoor about?

Mr. Sinha runs a textile mill, and shares his profits by paying generous wages and bonuses to his employees. After his passing, his son, Hiralal, takes over and changes everything in order to maximize profits. This brings him into conflict with his employees including Dinanath Saxena. When Dinanath openly confronts Hiralal in a public meeting, Hiralal wants him to tender a written apology, but Dinanath instead resigns and decides to open his very own mill with the help of a struggling Engineer, Ashok Mathur. They do eventually succeed, go into production, hire employees, and soon earn a good reputation. Dinanath gets his daughter, Meena, married to Ashok much to the chagrin of Smita, the daughter of multi-millionaire Kundanlal Batra, who had expected Ashok to marry her. She soon concocts a scheme to bring discord in the Sinha family, and also ensure Ashok's ruin.

Where to watch Mazdoor