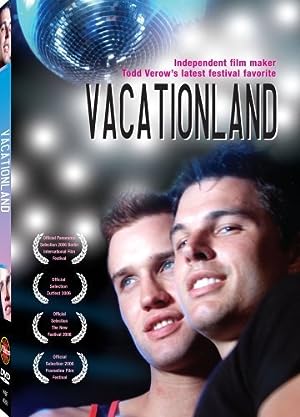 How to Watch Vacationland 2006 Online in Australia

The cast of Vacationland

What is Vacationland about?

Bangor, Maine is the setting for "Vacationland" where our three late high school age youngsters reside. Joe, his sister Theresa, and Joe's high school friend Andrew, the athlete, people the story. Joe and Theresa live with their irresponsible mother, who is often too drunk to materially intervene in their lives. Their part of Bangor encompasses the poor, the down and out, the unemployed and they're yearning to find some way to get out and to get on with their lives. Both Joe and Theresa work for a notions store, She runs the cash register, and Joe stocks the shelves. Andrew is the procurer of the trio. He appears able to to steal anything any of them need. Early in the tale Joe's mom has a fight with her current boyfriend and clocks him with the family phone leaving it blood covered and non functional. Joe mentions to Andrew that he needs to get a phone for his mom. Andrew asks what it should look like. Joe gestures with his hands and they travel to a notions shop. Joe stays outside. Surprisingly soon Andrew exits into the parking lot with a large bag full of merchandise. Joe asks him why he steals so much. Andrew says because he can get away with it. At almost the bottom of the bag Joe says, "Where's the phone?" Andrew pulls a phone similar to the ruined one out of the bottom of the bag. It's still wrapped in its plastic packaging mounted on cardboard. He asks Joe whether his mom will like it. As the story proceeds, we find that Andrew has other talents. He makes fake driver's licenses on two occasions for Joe that apparently pass muster, because the alcoholic beverages magically materialize, and are consumed by groups of similarly aged friends. Joe is gay and accepts his fate, but doesn't act on it. Andrew is gay but isn't happy about it and maintains a straight relationship with a classmate. So that they can travel together, Joe goes out with Andrew's girlfriend's girlfriend. As it turns out, neither Andrew nor Joe has a sexual relationship with the girl he dates. We find out that Andrew's girl is a lesbian with a crush on the girl Joe dates. When push comes to shove, Andrew's girl tries to force him to have intercourse with her. When he refuses, she figures out his secret, that he's also gay. She accuses him of being Joe's lover, and under pain of telling the school athletic community his orientation, forces him to have a sexual relationship with Joe which the girls watch. She then maneuvers her girlfriend (Joe's girl) into having a lesbian encounter with her. Joe scopes the want ads and finds a handicapped old man, an artist, who's looking for a model and for help at home. Joe gets the job, moves into the old man's apartment, and forms an attachment for him, buying his prescriptions, and keeping his home neat. The old artist notices Joe's artistic talent, and suggests that he pursue his art. Joe explains to Andrew that when he was 10 years old, he worked for a fat man in a warehouse. At the end of a shift, the fat man sent everybody home but proceeded to take the 10 year old into a gay relationship that traumatized and substantially injured him. He kept the incident to himself, never telling anyone until Andrew. From the time that the girls forced them to interact, Joe and Andrew were free to be their gay identities. Bangor had just one gay club. Joe's second fake ID permitted him to go with Andrew into the gay bar. One night while the boys were clubbing, Joe sees the fat man who injured him so long ago. Joe's sister Theresa has decided to pursue her career in Los Angeles, but she doesn't have enough money for air fare. One night, as she closes the register she pockets the cash... all the cash. She runs out to the airport to buy a ticket, but is $57.00 short. She decides that she can get the balance by engaging a man, and proceeds to catch one. She goes to his room and delays matters until he falls asleep. She takes the money out of his wallet finding enough to make up what she needs. At the airport she buys the ticket and leaves for California. Joe and his artist friend discuss Joe's future. He gets an application to art school for Joe, and Joe draws Andrew naked to submit with his application. Joe's artist friend suggests that when his pain gets so severe that he can't stand it, he knows a combination of his prescriptions that will put him to sleep... permanently. Theresa calls Joe from Los Angeles. She needs more money, but Joe doesn't have anything to send. She hangs up disappointed. Joe goes home to find the artist dead in his shower. He confers with Andrew, tells him he doesn't want to report the death just yet. They go to the gay club and find the fat man who hurt Joe. Joe is disappointed that the fat man doesn't remember him. He persuades the fat man to come with him to the artist's apartment. As the fat man proceeds to take Joe again, Andrew hits him with a metallic object. Joe pummels the fat man as a 10 year old would. They wrap him in a sheet and drag him to the beach. He's still alive, but a homophobic tough from the gay club notices him. Joe reads a note from the artist. He left enough money for Joe to get started in art school. The film ends with Joe and Andrew wrapped in each other's arms sitting beside the water, with their future looking about as bright as it ever has since we joined them in "Vacationland"

Where to watch Vacationland