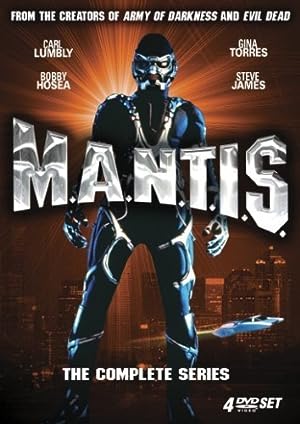 How to Watch M.A.N.T.I.S. Online in Australia

Miles Hawkins thought he had it all -- money, brains, a great family and a killer serve. A bullet changed his life. Left him paralyzed. Now, today, it's about to change again. Hawkins has invented a "harness." It's a piece of cutting edge technology with a headgear which allows the transmitters in the brain to bypass the spine. Translation: he can walk again. Actually, he can do more than that. He has more than he had before. Increased strength, speed, agility. The one thing he can't do is be normal. Either he's in a wheelchair, or he's in this techno-getup. Can't take a stroll in the park like you or me. What's he to do? At first a reluctant hero, Hawkins is drawn into a world of fighting crime because the violence which turned his life upside-down is doing the same to the world around him. While in the harness and headset, he assumes the identity of the Mantis and fights back. He's armed with a sophisticated array of hi-tech tools like the Chrysalid, a prototype police vehicle that can fly and go underwater. He's assisted by two people. John Stonebrake is his long-time friend and professional colleague who also happens to be the best man around for turning Hawkins' theories into nuts and bolts circuit boards. Taylor Savidge is a fast-wheeling, Gen-X bike courier who found out about the Hawkins/Mantis connection and demanded his way onto a team where an action junkie like himself can feel at home. Lined up in opposition is everyone else. The cops (including Detective Leora Maxwell who Hawkins is falling for) thinks he's making them look bad and want him brought to justice as a vigilante. The media wants to expose him. The criminals think he's bad for business. "M.A.N.T.I.S." takes place in a huge megalopolis on the West Coast. It takes place today. He could be in your neighborhood tonight. The Mantis...

Which streaming providers can you watch M.A.N.T.I.S. on

Here is the comprehensive list of streaming providers that will show M.A.N.T.I.S. in Australia. If M.A.N.T.I.S. will appear with other providers further down the line, this table will be updated.

M.A.N.T.I.S. is a great Action movie, we’ve selected several other movie options that we think you would like to stream if you have watched M.A.N.T.I.S.

M.A.N.T.I.S. is a great action show, we’ve selected several other show options that we think you would like to stream if you have watched M.A.N.T.I.S.