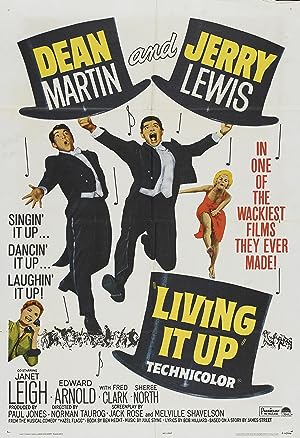 How to Watch Living It Up 1954 Online in Australia

What is Living It Up about?

Pretty Wally Cooper, a reporter for the New York Chronicle convinces her editor to let her do a series of articles on Homer Flagg, a young man from New Mexico who is believed to be dying as a result of radioactive poisoning. Before she arrives out west, Homer learns from his doctor that the diagnosis was a mistake and he's perfectly healthy. That doesn't stop them from accepting Wally's offer of an all- expenses paid trip to New York. Everyone in New York takes pity on Homer, while Homer and his doctor try to keep up their pretense.

Where to watch Living It Up

Which streaming providers can you watch Living It Up on

Here is the comprehensive list of streaming providers that will show Living It Up in Australia. If Living It Up will appear with other providers further down the line, this table will be updated.

The cast of Living It Up

Living It Up is a great Comedy movie, we’ve selected several other movie options that we think you would like to stream if you have watched Living It Up

Living It Up is a great comedy show, we’ve selected several other show options that we think you would like to stream if you have watched Living It Up

Watch Living It Up