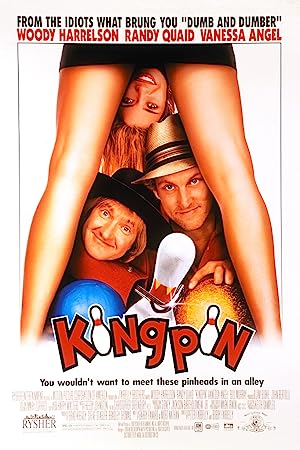 How to Watch Kingpin 1996 Online in Australia

What is Kingpin about?

Roy Munson was raised to be the best bowler in the world (trained early on by his father). But a fellow bowler, Ernie McCracken and a misunderstanding with some rough punks, leaves poor Roy with the loss of his bowling hand! Not to let this get him down, he gets a prosthetic hand and becomes a travelling sales man. But it's really all down hill for him from that night on until ... One day he meets Ishmael who is Amish and sneaks away from the farm to bowl (his fellow Amish would disown him if they knew)! Roy convinces Ishmael to let him be his trainer and he'll make him the best bowler the world has ever seen. Reluctantly Ishmael agrees to go on the road and shortly afterwards actually finds that life outside the farm is quite fun. Soon their paths cross that of Ernie McCracken who is still a top ranking bowler. While Roy's career and life have landed in the toilet bowl, Ernie is still drawing huge crowds and all the babes! They both square off for the ultimate bowling championship ... to see which one truly IS the champion.

Where to watch Kingpin

Which streaming providers can you watch Kingpin on

Here is the comprehensive list of streaming providers that will show Kingpin in Australia. If Kingpin will appear with other providers further down the line, this table will be updated.

The cast of Kingpin

Kingpin is a great Comedy movie, we’ve selected several other movie options that we think you would like to stream if you have watched Kingpin

Kingpin is a great comedy show, we’ve selected several other show options that we think you would like to stream if you have watched Kingpin