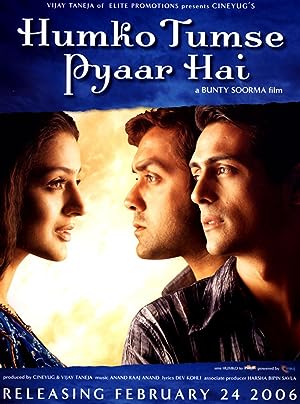 How to Watch Humko Tumse Pyaar Hai 2006 Online in Australia

What is Humko Tumse Pyaar Hai about?

Durga (Amisha Patel) is a beautiful blind woman with a talent for shaping pottery. She is poor, and lives with her widowed mother in a simple home. By chance Durga crosses paths with Babu Rohit (Arjun Rampal) who saves her life when she is about the fall over a cliff. The pair spend time together and fall in love. At one point Durga creates a clay bust of her Babu ("sir") but weeps because she cannot see it. Rohit tells her that he will find a way to help her see again. But before anything could happen between the two Dubai returned Rana, another man who wants to marry Durga, kills her mom and then Babu himself. A devastated Durga undergoes eye surgery through Swiss-based Dr. R.K. Prasad and regains her sight. Dr. Prasad takes her with him to live in Switzerland and this is where multi-millionaire Raj (Bobby Deol) enters her life and wants to marry her. Dr. Prasad persuades her to let go of Babu's memory and marry Raj, which she does. At their engagement party, Raj's friend, Rohit, who was missing in India, is found. His appearance disrupts Durga's life as she thinks that her Babu has returned back. Rohit however recognize her and convinces her that her "sir" where in Babu has returned. On a coincidence Raj comes to know of the entire pass between Durga and Babu and he decides to reunite the couple once again.