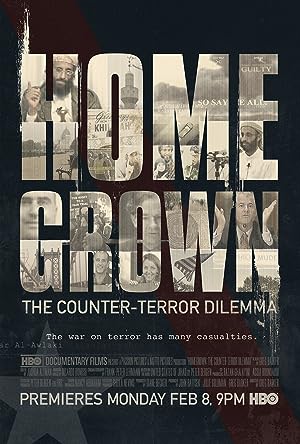 How to Watch Homegrown: The Counter-Terror Dilemma 2016 Online in Australia

The cast of Homegrown: The Counter-Terror Dilemma

What is Homegrown: The Counter-Terror Dilemma about?

HOMEGROWN: THE COUNTER-TERROR DILEMMA explores the real and perceived threat of homegrown Islamic extremism in America today through first-hand accounts from those on the front lines of this battle - family members of convicted terrorists, those trying to persuade young people from embracing extremism, Muslim Americans facing fear and suspicion in their communities, victims of terrorist attacks, and insights from experts and prosecutors who worked homegrown terrorist cases. Among the questions the film raises: Why are American citizens signing up for ISIS? How big is the threat, and how effective have the efforts of US counter-terrorism agencies been in combatting homegrown terrorism? What are the unintended consequences of such efforts? And, what freedoms and values do we sacrifice in our efforts to track down established and nascent extremists in our midst?

Where to watch Homegrown: The Counter-Terror Dilemma