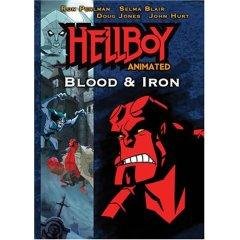 How to Watch Hellboy Animated: Blood and Iron 2007 Online in Australia

The cast of Hellboy Animated: Blood and Iron

What is Hellboy Animated: Blood and Iron about?

In 1939, young Professor Bruttenholm destroyed Erzsebet Ondrushko, a female vampire who bathed in the blood of innocents to stay young. Now someone in upstate New York is trying to bring her back, and the elderly Professor Broom has decided to investigate it himself. He takes the top BPRD agents, Hellboy, Liz Sherman and Abe Sapien, who are more worried about his welfare than the return of any vampire. Their tune changes when they face a horde of ghosts, a phantom wolf pack, witches, harpies, a giant werewolf and Erzsebet herself. Hellboy ends up battling the Queen of Witches, the goddess Hecate, who wants him to embrace his true destiny, a destiny that includes the destruction of mankind.

Where to watch Hellboy Animated: Blood and Iron