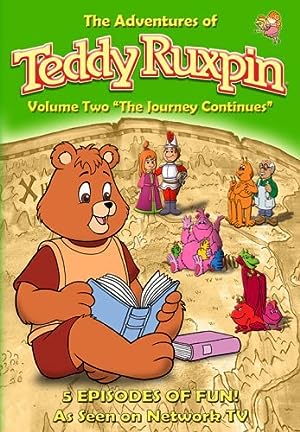 How to Watch The Adventures of Teddy Ruxpin Online in Australia

The cast of The Adventures of Teddy Ruxpin

What is The Adventures of Teddy Ruxpin about?

Illiop Teddy Ruxpin (Illiops being bear-like creatures) leaves his homeland in Rillonia with his friend Grubby, an octopede insect, in search of adventure. They meet up with an inventive scientist named Dr. Newton Gimmick who accompanies them on their quest for the Treasure of Grundo. What the Trio unexpectedly find are six crystals with different meanings and powers. These crystals, however, also can enable the Monsters and Villains Organization (MAVO) to have absolute power over the land, and the leader, Quellor, wants to make sure that an Illiop never possesses the crystals. Elsewhere, a less pronounced threat also routinely besieges the Trio, which is the wannabe villain Jack Tweeg, a greedy troll who has huge hopes for joining MAVO. The sixty five episode series, based upon the tape-and-book toy bear Teddy Ruxpin, unfolds gradually, as the Trio meet up with more and more interesting and often friendly creatures and visit intriguing lands.

Where to watch The Adventures of Teddy Ruxpin

Watch The Adventures of Teddy Ruxpin

More Action movies like The Adventures of Teddy Ruxpin

More Action tv shows like The Adventures of Teddy Ruxpin