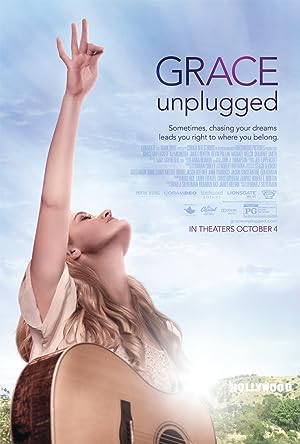 How to Watch Grace Unplugged 2013 Online in Australia

The cast of Grace Unplugged

What is Grace Unplugged about?

Grace Unplugged is an Inspirational movie starring Amanda "AJ" Michalka as 18 year old Christian singer/songwriter, Grace Rose Trey. Beautiful, highly talented and restless, Grace is so far undiscovered outside church. She performs there each Sunday with her gifted father Johnny, the praise music director at Freedom Community Chapel, a small town Alabama church. A former rock star, Johnny Trey charted a Billboard number one single 20 years before. When the hits stopped coming he crash landed hard, a one hit wonder. Johnny found Christ and a new life for his family, far from the Hollywood Hills. One day without warning, Grace leaves for Los Angeles. She has landed a record deal with the help of Johnny's ruthless former manager and producer Frank "Mossy" Mostin. Mossy sees in Grace a potential pop superstar - the next Katy Perry. Cutting off contact with her parents, Grace seems prepared to walk away from her Christian faith and music to achieve her long-suppressed fantasy of Hollywood super stardom. Will the experience cause her to reject her faith, or rediscover it?

Where to watch Grace Unplugged