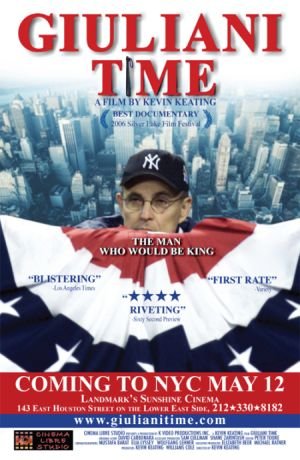 How to Watch Giuliani Time 2005 Online in Australia

The cast of Giuliani Time

What is Giuliani Time about?

Ever since the events of 9/11, Rudy Giuliani has become a name recognized the world over. His role as mayor during that catastrophe elevated him to the status of an international hero. He went on to be Time magazine's "Person of the Year," receive a knighthood from Queen Elizabeth and become a key fund raiser and energetic campaigner for the Bush/Cheney administration. Over the last year his name has been rumored as a popular choice for not only senator and governor but as America's envoy to the United Nations, the new director of the CIA and a number of other high-profile positions. He is also talked about as a favored candidate for the 2008 GOP Presidential nomination. But what defined "America's Mayor" before he was catapulted to a kind of secular sainthood? During the only years Giuliani held office as an elected official, what was his record like? What was behind a Republican "New Urban Paradigm" in an overwhelmingly Democratic city? During the peak years of the late 1990s, the "new" New York City, awash in tourism and prosperity from the then-booming dot-com economy, was praised as the model of a new urban paradigm. While Giuliani's local popularity was, at times, extremely low in New York City, it was virtually unquestioned outside of local media that Rudy Giuliani was responsible for a "turnaround" in New York City from a darkly chaotic city to a gleaming, moneyed, safe metropolis. This perception was largely due to high-profile policies like "quality of life" policing, "workfare" and welfare reform as well as a compliant press. Many of these policies were formulated by conservative think tanks and were watched and emulated by cities all over the world, from London to Mexico City. But evidence from federal, state and local investigations, along with first-person accounts from communities throughout the city, told a different kind of story. According to many, Giuliani's brand of politics and politicking racially polarized and divided the city and, during what was economically the best of times, did nothing to alleviate poverty and even exacerbated the disparity between rich and poor. Credit for the "miraculous" reduction in crime, his most lauded success, is still under debate in academic and professional circles. The long-term consequences of policing strategies like "stop and frisk," "zero tolerance" and "broken windows" also came under intense criticism. His record on the First Amendment was disastrous and his use and abuse of governmental power well documented. In addition, the Giuliani era demonstrated how New York City became the site for a reversal of progressive social and economic programs that flourished in the 1960s and 1970s and originated in the New Deal of the 1930s. Giuliani Time is the story of the impact this former Reagan administration official and high profile federal prosecutor had on what he called the "Capital of the World." It is a wild ride of political ambition and amnesia, alternate realities, wars of perception and dramatic, even cataclysmic, events. With participants that range from the former police commissioner and schools chancellor under Giuliani, former New York mayors and conservative policy-makers to journalists, policemen, homeless people, artists and even Donald Trump. Giuliani Time presents a diverse, original and poignant perspective on this historical period in New York City and how the most famous event of all elevated a "lame duck" mayor to an international name--a name that is not going away anytime soon.

Where to watch Giuliani Time