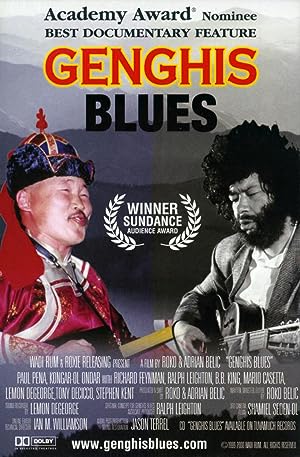 How to Watch Genghis Blues 1999 Online in Australia

What is Genghis Blues about?

The extraordinary odyssey of a U.S. musician of Cape Verdean ancestry to Tannu Tuva, in central Asia, where nomadic people throat sing more than one note simultaneously, using vocal harmonics. A bluesman, Paul Pena, blind and recently widowed, taught himself throat singing and was by chance invited to the 1995 throat-singing symposium in Kyzyl. Helped by the "Friends of Tuva," Pena makes the arduous journey. Singing in the deep, rumbling kargyraa style, Pena gives inspired performances at the festival, composes songs in Tuvan, washes his face in sacred rivers, expresses the disorientation of blindness in foreign surroundings, and makes a human connection with everyone he meets.

Where to watch Genghis Blues

Which streaming providers can you watch Genghis Blues on

Here is the comprehensive list of streaming providers that will show Genghis Blues in Australia. If Genghis Blues will appear with other providers further down the line, this table will be updated.

The cast of Genghis Blues

Genghis Blues is a great Documentary movie, we’ve selected several other movie options that we think you would like to stream if you have watched Genghis Blues

Genghis Blues is a great documentary show, we’ve selected several other show options that we think you would like to stream if you have watched Genghis Blues