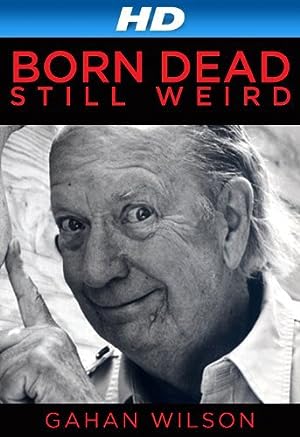 What is Gahan Wilson: Born Dead, Still Weird about?

Gahan Wilson: Born Dead, Still Weird is an insightful profile of the legendary cartoonist. For over fifty years, Gahan Wilson has been known for his ghoulish, twisted visions that combine horrific elements with comedy, as well as political and ecological cartoons. His cartoons have appeared in Playboy Magazine, The New Yorker, National Lampoon, The New York Times, Colliers, and Look. Wilson sees monsters and irony in ordinary, everyday situations and turns them into explosive cartoons. The documentary takes an intimate look at Wilson's bizarre and personal inspirations, the inner workings of the cartoon world, and how his quirky creations have profoundly affected legions of fans, including some surprising celebrities. In addition to Wilson's art, the film features interviews with Stephen Colbert, Stan Lee, Bill Maher, Randy Newman, Guillermo Del Toro, Neil Gaiman, Roz Chast, Lewis Black, Hugh M. Hefner, David Remnick, Peter Straub, Nicholas Meyer and more. As Wilson recounts his life and work, Born Dead, Still Weird reveals the genius of this icon of the cartoon world, who was drawing monsters before he could read or write as a way of coping with growing up with alcoholic parents during the Depression. The documentary also captures a behind-the-scenes look into the challenging life of professional cartoonists.

Which streaming providers can you watch Gahan Wilson: Born Dead, Still Weird on