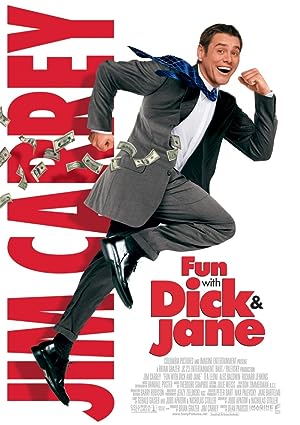 The cast of Fun with Dick and Jane

What is Fun with Dick and Jane about?

The day before Globodyne's stock tanks, a la Enron, and its pension fund evaporates, the corporation's CEO and CFO set up middle manager Dick Harper to be the public face of the disaster. Jobless, and with no savings, pension, or home equity, Dick and his wife Jane sink slowly into poverty. He looks for work (as do all former Globodyne executives); he even tries day labor with the relatives of their Mexican nanny. A foreclosure notice sends Dick and Jane over the edge into a life of blue-collar crime. Then, as things finally look up, the report of an looming indictment pushes Dick and Jane toward a denouement with the real criminals, the white-collar guys.

Where to watch Fun with Dick and Jane

More Comedy movies like Fun with Dick and Jane

More Comedy tv shows like Fun with Dick and Jane