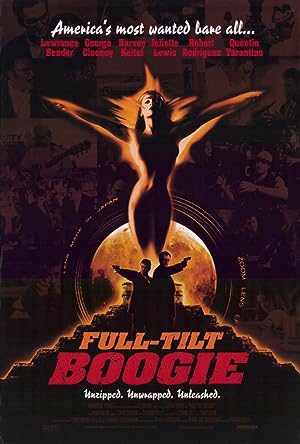 How to Watch Full Tilt Boogie 1997 Online in Australia

The cast of Full Tilt Boogie

What is Full Tilt Boogie about?

A docu-drama about filming From Dusk Till Dawn (1996). Sarah Kelly takes a non-union film crew onto the set and on location near Barstow of this independent, non-union production. Camaraderie and a constant eye on the shooting schedule dominate interactions. Quentin Tarantino and George Clooney mug for Kelly's camera; Robert Rodriguez, Juliette Lewis and Fred Williamson talk about craft; we watch scenes being shot; and Kelly asks crew members why they do what they do. Also, the International Alliance of Theatrical Stage Employees protests the non-union status of 'From Dusk Till Dawn', executive producer Lawrence Bender tells his side, and Kelly talks to a Variety reporter and others. What's the nature of an indie film?

Where to watch Full Tilt Boogie