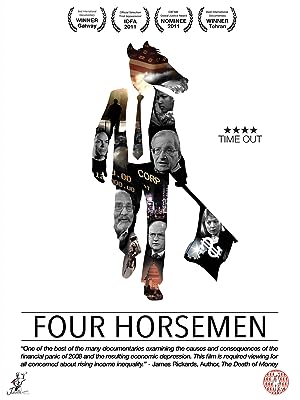 How to Watch Four Horsemen 2012 Online in Australia

What is Four Horsemen about?

The modern day Four Horsemen continue to ride roughshod over the people who can least afford it. Crises are converging when governments, religion and mainstream economists have stalled. 23 international thinkers come together and break their silence about how the world really works and why there is still hope in re-establishing a moral and just society. Four Horsemen is free from mainstream media propaganda, doesn't bash bankers, criticize politicians or get involved in conspiracy theories. The film ignites the debate about how we usher a new economic paradigm into the world which, globally, would dramatically improve the quality of life for billions.

Where to watch Four Horsemen

Which streaming providers can you watch Four Horsemen on

Here is the comprehensive list of streaming providers that will show Four Horsemen in Australia. If Four Horsemen will appear with other providers further down the line, this table will be updated.

The cast of Four Horsemen

Four Horsemen is a great Documentary movie, we’ve selected several other movie options that we think you would like to stream if you have watched Four Horsemen

Four Horsemen is a great documentary show, we’ve selected several other show options that we think you would like to stream if you have watched Four Horsemen