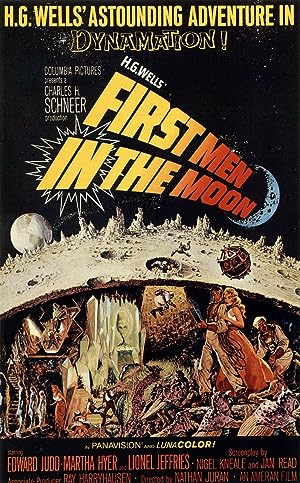 The cast of First Men in the Moon

What is First Men in the Moon about?

Based on the HG Wells story. The world is delighted when a space craft containing a crew made up of the world's astronauts lands on the moon, they think for the first time. But the delight turns to shock when the astronauts discover an old British flag and a document declaring that the moon is taken for Queen Victoria proving that the astronauts were not the first men on the moon. On Earth, an investigation team finds the last of the Victorian crew - a now aged Arnold Bedford and he tells them the story of how he and his girlfriend, Katherine Callender, meet up with an inventor, Joseph Cavor, in 1899. Cavor has invented Cavorite, a paste that will allow anything to deflect gravity and he created a sphere that will actually take them to the moon. Taking Arnold and accidentally taking Katherine they fly to the moon where, to their total amazement, they discover a bee-like insect population who take an unhealthy interest in their Earthly visitors...

Where to watch First Men in the Moon

First Men in the Moon Trailer

More Adventure movies like First Men in the Moon

More Adventure tv shows like First Men in the Moon