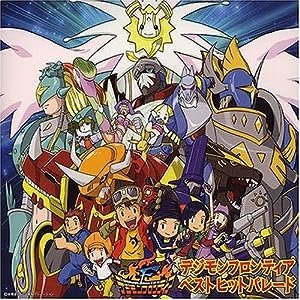 How to Watch Digimon Frontier Online in Australia

What is Digimon Frontier about?

Digimon Frontier introduces a new universe in the Digimon fandom. Five kids from the Real World have been called to the Digital World to acquire the "legendary spirits" to save the Digital World from one of the 3 Holy Angels, Cherubimon, who has revolted against the other two. Takuya, the hero, Kouji, the loner, Izumi, the girl, Junpei, the comedic relief, and Tomoki, the little kid, are the 5 Chosen Children from the Real World that have to use the legendary spirits to "Spirit Evolve" into the legendary warriors themselves. Can they unravel the secret behind Cherubimon's rebellion before his own legendary warriors take them out?

Where to watch Digimon Frontier

Which streaming providers can you watch Digimon Frontier on

The cast of Digimon Frontier

Digimon Frontier is a great Action movie, we’ve selected several other movie options that we think you would like to stream if you have watched Digimon Frontier

Digimon Frontier is a great action show, we’ve selected several other show options that we think you would like to stream if you have watched Digimon Frontier