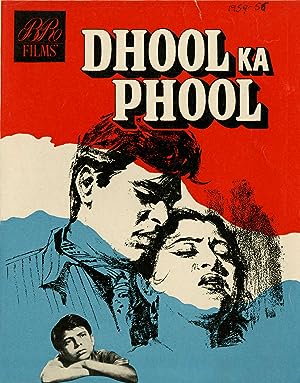 How to Watch Dhool Ka Phool 1959 Online in Australia

The cast of Dhool Ka Phool

What is Dhool Ka Phool about?

Meena Khosla has an bicycle accident with fellow collegian Mahesh Kapoor, and after a few misunderstandings both fall in love with each other. They would like to get married, plan accordingly, and get intimate. When Mahesh's dad summons him home to get married, Mahesh initially refuses, but subsequently gives in, and gets married to Malti Rai. In the meantime, a pregnant Meena is thrown out of the house by her uncle and aunt, gives birth to baby boy, and abandons the child in a forest. The child is found by a kind-hearted devout Muslim, Abdul Rashid, who decides to adopt him, much to the charging of the Hindu and the Muslim communities. Abdul re-locates to the city, but is unable to shake the stigma of bringing up an illegitimate child, Roshan, who is subjected to all kinds of taunts by fellow classmates. Roshan then stops going to school, meets with Jaggu, a petty thief, who befriends him and introduces him to a life of crime. Then one day, the police arrest Roshan for theft, and bring him before a very disapproving judge - who is none other than his biological dad, Magistrate Mahesh Kapoor, who is all ready to impose a heavy jail sentence. Will the knowledge that his youth is his son change Mahesh's mind?

Where to watch Dhool Ka Phool