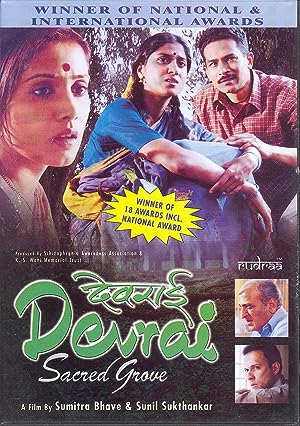 How to Watch Devrai 2004 Online in Australia

Devrai is the story of Shesh Shahi (Atul Kulkarni) , a brilliant but eccentric man . While living with his family in a village in the Konkan region of the state of Maharashtra in India , Shesh becomes increasingly obsessed with a small patch of forest near his home which he calls as "Devrai" (meaning 'sacred grove' in Marathi) and starts o feel that the perfect harmony between the biological factors in Devrai offer a solution to the chaos which he perceives in the outside world . He is later diagnosed with schizophrenia and his younger sister Seena Gore (Sonali Kulkarni) tries to cure him by seeking professional help .

Which streaming providers can you watch Devrai on

Here is the comprehensive list of streaming providers that will show Devrai in Australia. If Devrai will appear with other providers further down the line, this table will be updated.

Devrai is a great Drama movie, we’ve selected several other movie options that we think you would like to stream if you have watched Devrai

Devrai is a great drama show, we’ve selected several other show options that we think you would like to stream if you have watched Devrai