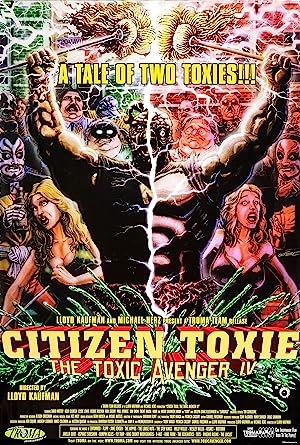 How to Watch Citizen Toxie: The Toxic Avenger IV 2000 Online in Australia

The cast of Citizen Toxie: The Toxic Avenger IV

What is Citizen Toxie: The Toxic Avenger IV about?

When the notorious Diaper Mafia take hostage the Tromaville School for the Very Special, only the Toxic Avenger and his morbidly obese sidekick Lardass can save Tromaville. However, an explosion results in some unforeseeable consequences, creating a dimensional tear between Tromaville and its dimensional mirror image, Amortville. While the Toxic Avenger (Toxie) is trapped in Amortville, Tromaville comes under the control of Toxie's evil doppelganger, the Noxious Offender (Noxie). Will Toxie return to Tromaville in time to stop Noxie's rampage or is he doomed to remain a second-class citizen in Amortville forever? How did Toxie's wife Sarah become pregnant with two babies from two different fathers? Will Tito ever get over his teen angst and become a productive member of society?

Where to watch Citizen Toxie: The Toxic Avenger IV