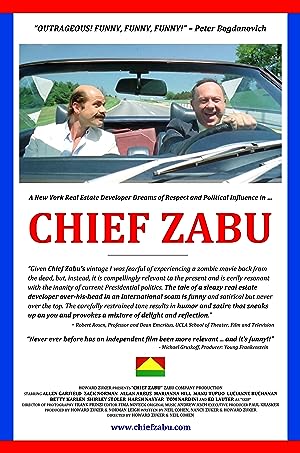 How to Watch Chief Zabu 1988 Online in Australia

What is Chief Zabu about?

In 1986 Howard Zuker and Neil Cohen directed their first and only film, CHIEF ZABU, a low budget, audacious socio-political comedy about New York real estate operators who scheme to take over a Polynesian country while its leader is in New York seeking admission to the UN. Featuring a cast of legendary character actors - Allen Garfield (The Conversation), Zack Norman (Romancing the Stone), Allan Arbus (Putney Swope), Marianna Hill (The Godfather: Part 2), Manu Tupuo (Hawaii), Ed Lauter (The Longest Yard), Shirley Stoler (Seven Beauties), plus the harp-playing "Miss California," Lucianne Buchanan - and set in Manhattan, The Hudson Valley, Beverly Hills, Las Vegas and the fictional island nation of Tiburaku, CHIEF ZABU was shot almost entirely on a college campus, in 15 days, for under $200,000 (with the cast, crew, and student interns all living together in the dorms). After a series of snafus that paralleled the film's madcap plot, and despite featured coverage of its production in LIFE MAGAZINE, CHIEF ZABU was never completed, distributed, nor publicly shown. Now, 30 years later, inspired by the rise of Donald Trump, the first-time directors (now with the aggregate age of 141 years) have finally finished their film about a realtor with a dream of political influence: the never-before-seen CHIEF ZABU.

Where to watch Chief Zabu

Which streaming providers can you watch Chief Zabu on

Here is the comprehensive list of streaming providers that will show Chief Zabu in Australia. If Chief Zabu will appear with other providers further down the line, this table will be updated.

The cast of Chief Zabu

Chief Zabu is a great Comedy movie, we’ve selected several other movie options that we think you would like to stream if you have watched Chief Zabu