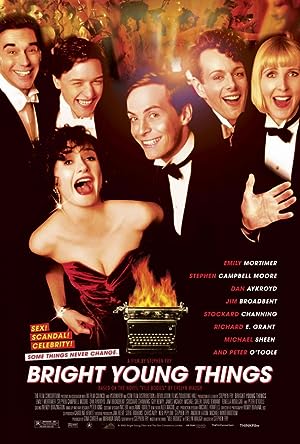 How to Watch Bright Young Things 2003 Online in Australia

The cast of Bright Young Things

What is Bright Young Things about?

A fool and his money. In the 1930s, Adam Fenwick-Symes is part of the English idle class, wanting to marry the flighty Nina Blount. He's a novelist with a hundred-pound advance for a manuscript confiscated by English customs. He spends the next several years trying to get money and to set a wedding date: he trades in gossip, wins money on wagers then gives it to a drunken major who's suggested he bet on a horse in an upcoming race. Adam tries to get the money back, but can't find the major. Meanwhile, Nina needs security, friends drink too much, and general unhappiness spoils the party. Then war breaks out. Is Adam's bright youth dimming with the fall of an empire?

Where to watch Bright Young Things