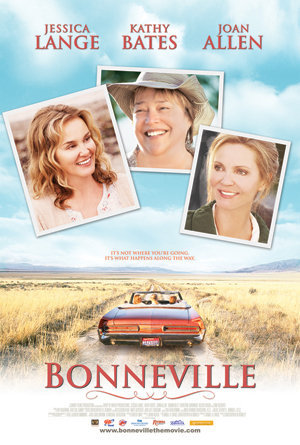 How to Watch Bonneville 2006 Online in Australia

The cast of Bonneville

What is Bonneville about?

The distressed emotions that Arvilla Holden are feeling upon the death of her husband Joe Holden are compounded by dealing with Joe's adult daughter, Francine Packer. Joe and Arvilla were lovingly married for twenty years, and although they lived in Pocatello, Idaho - Arvilla's home town - they traveled the world on one adventure after another. Joe was from Santa Barbara, California, where Francine and the extended Holden family still live. Arvilla is certain that Joe wrote a new will after they got married, but since that will is nowhere to be found, the official will is the one that Francine has in her possession, which outlines certain things that Arvilla knows Joe would not now have wanted. That will states that Joe's embalmed body is to be interned with Francine's mother in Santa Barbara, despite Joe already having been cremated. Arvilla knows that Joe would have wanted his ashes scattered into the wind. The will also deeds the house in which Arvilla and Joe lived their entire marriage to Francine, which would leave Arvilla not only homeless, but shut out of the house in which she has strong and loving memories. Francine offers a settlement with Arvilla: Joe's ashes for the house. Arvilla reluctantly agrees. Arvilla plans on bringing the ashes to the memorial service in Santa Barbara in one week's time, accompanied by her two best friends, free wheeling and single Margene Cunningham, and "perfect" mom Carol Brimm, all three women being Mormon of varying devotion. The plan is to drive the three hours from Pocatello to Salt Lake City, Utah, to catch a flight to Santa Barbara. But upon their departure from Pocatello in Joe's refurbished Pontiac Bonneville convertible, Arvilla takes the three on a road trip instead to all the places she and Joe loved en route to Santa Barbara. This trip gives Arvilla time to decide ultimately what she will do regarding her deal with Francine, which is affected by her time with Margene and Carol, and by encounters they have with people they meet along the way, most specifically a young man named Bo who is on a search for his biological father who he has never met, and a long haul trucker named Emmett.

Where to watch Bonneville