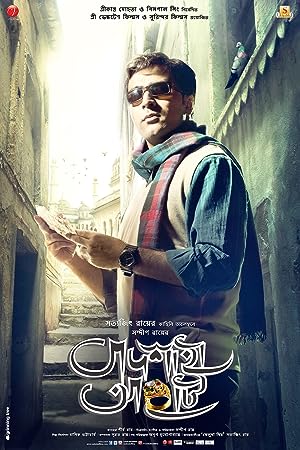 How to Watch Badshahi Angti 2014 Online in Australia

The cast of Badshahi Angti

What is Badshahi Angti about?

Feluda and his cousin Topshe goes to Lucknow with Topshe's father to spend the Puja vacation. They arrived at the house of Dhirendra Kumar Sanyal, a friend of Topshe's father. That evening Dr. Shrivastav also came to Dhirendra Kumar Sanyal and tells him about last night, a thief tried to steal his 'Ring of Aurangzeb' (The Emperor's Ring) which was given to him by Pyarilaal Seth. After the incident Dr. Shrivastav has been afraid and asks Dhirendra Kumar Sanyal to keep the ring safe. Dhirendra Kumar Sanyal agreed and keeps the ring to his home. But someday the ring goes missing from there. Then Feluda and Topshe started investigation for the culprit. Meanwhile, Feluda meets an interesting person in doctor's neighborhood, Mr. Bonobihari Sarkar. Bonobihari babu has ferocious and poisonous creatures like crocodile, African tiger, hyena, rattlesnake, scorpion and black widow spider in his own home. Feluda also meets Mahavir, late Pyarilal's son and a film actor who believes a foul play behind his father's death. Later, it is found that the ring was already taken by Feluda himself to keep it safe from miscreants. They traveled to Lakshman Jhula Temple, Haridwar. Bonbihari was the mastermind behind burglary who earlier unsuccessfully tried to take it from Pyarilal. In one such attempt, Pyarilal died. He also tries to take it from Feluda. He traps Feluda and Topshe in a long cabin with a rattle snake for company, but Feluda with his skill, intelligence and bravery, keeps the ring safe and nabs Bonobihari and his assistant, Ganesh Guha.

Where to watch Badshahi Angti