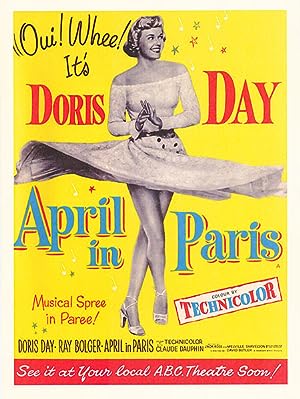 How to Watch April in Paris 1952 Online in Australia

What is April in Paris about?

Miss Ethel 'Dynamite' Jackson is a chorus girl who mistakingly receives an invitation from the State Department to represent the American theatre at an arts exposition in Paris, France. There's only one problem, the invitation was meant for Miss Ethel Barrymore. Meanwhile, S. Winthrop Putnam, the bureaucrat who made the mistake tries unsuccessfully to correct his mix-up. It's too late, for Dynamite Jackson is off to Paris, where the two meet and marry, or so they think!

Where to watch April in Paris

Which streaming providers can you watch April in Paris on

Here is the comprehensive list of streaming providers that will show April in Paris in Australia. If April in Paris will appear with other providers further down the line, this table will be updated.

The cast of April in Paris

April in Paris is a great Comedy movie, we’ve selected several other movie options that we think you would like to stream if you have watched April in Paris

April in Paris is a great comedy show, we’ve selected several other show options that we think you would like to stream if you have watched April in Paris