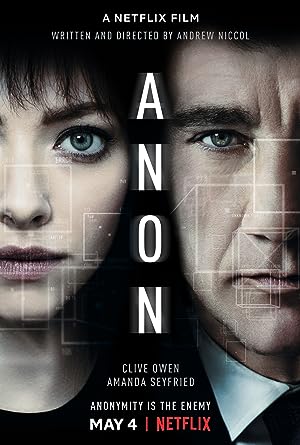 How to Watch Anon 2018 Online in Australia

What is Anon about?

ANON is set in a near-future world where there is no privacy, ignorance or anonymity. Our private memories are recorded and crime almost ceases to exist. In trying to solve a series of unsolved murders, SAL FRIELAND (Owen) stumbles onto a young woman (Seyfried) who appears to have subverted the system and disappeared. She has no identity, no history and no record. Sal realizes it may not be the end of crime but the beginning. Known only as THE GIRL, Sal must find her before he becomes the next victim.

Where to watch Anon

Which streaming providers can you watch Anon on

Here is the comprehensive list of streaming providers that will show Anon in Australia. If Anon will appear with other providers further down the line, this table will be updated.

The cast of Anon

Anon is a great Crime movie, we’ve selected several other movie options that we think you would like to stream if you have watched Anon

Anon is a great crime show, we’ve selected several other show options that we think you would like to stream if you have watched Anon