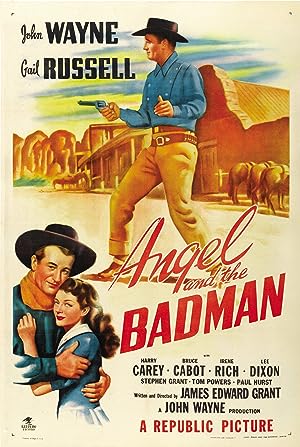 How to Watch Angel and the Badman 1947 Online in Australia

The cast of Angel and the Badman

What is Angel and the Badman about?

Notorious gunman Quirt Evans is wounded and on the run. He arrives at a Quaker farm owned by Thomas Worth and his family where he collapses from exhaustion. Evans asks Thomas and his daughter Penelope to drive him into town in their wagon in order to send an urgent telegram. The telegram contains a land claim and is sent to the land recorder's office. The Quaker family is ignoring the town doctor's advice to rid themselves of the gunfighter and they compassionately tend to the delirious Evans. Penny Worth becomes intrigued by his ravings of past loves.When Evans regains consciousness, Penny explains to him about the Quaker credo of non-violence and way of life. Three weeks later, two desperadoes, Laredo Stevens and Hondo Jeffries, ride into town looking for Evans.Penny's younger brother, Johnny, rushes home to inform Evans of his visitors and Evans prepares to flee. Penny, now smitten with Evans, offers to run off with him. Upon hearing the sound of approaching horses, Evans grabs his revolver and, to his horror, discovers that it has been emptied. His life is in serious danger.

Where to watch Angel and the Badman

Angel and the Badman Trailer

More Romance tv shows like Angel and the Badman