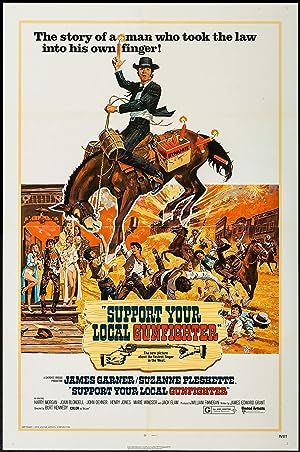 How to Watch Support Your Local Gunfighter 1971 Online in Australia

The cast of Support Your Local Gunfighter

What is Support Your Local Gunfighter about?

James Garner plays a ladies' man who ends up on the run from a conquest. He has an embarrassing problem that requires a doctor, but that is not immediately disclosed. He and a town barsweep form a plot to impersonate a well known gunfighter so that Garner can pay off his debts and skip town before the soon to come arrival of the real gunfighter. The cast is almost identical to Support Your Local Sheriff! (1969) and the humor is similar. Typical: "You hit him from behind!" Garner: "Just as hard as I could!"

Where to watch Support Your Local Gunfighter