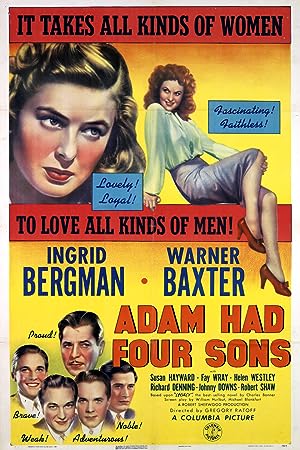 How to Watch Adam Had Four Sons 1941 Online in Australia

The cast of Adam Had Four Sons

What is Adam Had Four Sons about?

Early 1905, French governess Emilie Gallatin (Ingrid Bergman) is hired to care of a luxurious family mansion and the four sons of wealthy Adam Stoddard (Warner Baxter) and his wife, Molly Stoddard (Fay Wray). Things couldn't be more perfect, until in 1907, first Molly dies, and then the stock market crashes, wiping out the Soddard's fortune. Emilie is forced to go back home to France. The parting is difficult, for the teenager boys - Jack Stoddard (Billy Ray), David Stoddard (Steven Muller), Chris Stoddard (Wallace Chadwell), and Phillip Stoddard (Bobby Walberg) - had grown to depend on Emilie more after the loss of their mother, and Emilie had fallen in love with Adam. Seven years later, just before the beginning of World War I, the family's fortunes have improved, and Adam insists with Emilie to return and stay on as part of the family - preserving her from the foreseeable fates of war. The four boys are adults, and they all serve in various branches of the military - Jack Stoddard (Richard Denning), David Stoddard ('Johnny Downs (I)'), Chris Stoddard (Robert Shaw), Phillip Stoddard ('Charles Ling'). Meanwhile, David, the second son, brings home his carefree, gold-digging wife named Hester (Susan Hayward). To make things worse, she comes to live in the family home while David is out at war. Hester degrades Emilie, cons Adam into believing she is a sweet young thing, and cheats on David by attempting to seduce his brother Jack, who will have nothing to do with her. One night, the father sees a silhouette of the supposed lovers, but before he can identify them, Emilie enters the room from another door and pretends that it was her, not Hester, with Jack. This cover-up for Jack will strain Emilie's relationships with both the boys and Adam, and makes an easy target of her for the gutter-snipe Hester. The internecine war between the governess and Hester culminates in an out-and-out brawl. Adam unwittingly sides with Hester, who showers crocodile tears on his shoulder (with a telling close-up as she displays a wicked smile over his shoulder) while he comforts her. Hester's malicious personality is revealed to a visiting aunt, Adam's cousin Phillippa (Helen Westley), and Hayward is exposed as an uncontrollable vixen.

Where to watch Adam Had Four Sons