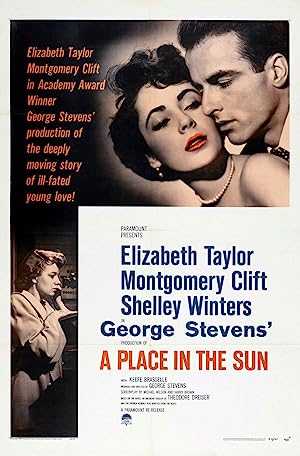 What is A Place in the Sun about?

The young and poor George Eastman (Montgomery Clift) leaves his religious mother and Chicago and arrives in California expecting to find a better job in the business of his wealthy uncle Charles Eastman. His cousin Earl Eastman advises him that there are many women in the factory and the basic rule is that he must not hang around with any of them. George meets the worker of the assembly line, Alice Tripp, in the movie theater and they date. Meanwhile, the outcast George is promoted and he meets the gorgeous Angela Vickers at a party thrown at his uncle's house. Angela introduces him to the local high society and they fall in love with each other. However, Alice is pregnant and she wants to get married with George. During a dinner party at Angela's lake house with parents, relatives, and friends, Alice calls George from the bus station and gives him thirty minutes to meet her; otherwise she will crash the party and tell what has happened. George is pressed by the situation which ends in a tragedy.

Where to watch A Place in the Sun

The cast of A Place in the Sun

More Drama movies like A Place in the Sun

More drama tv shows like A Place in the Sun

Watch A Place in the Sun