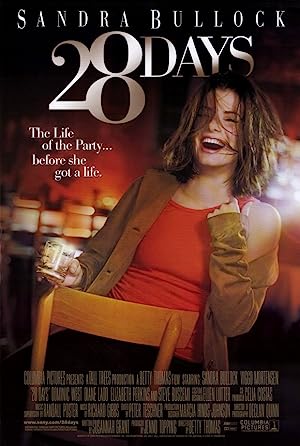 New York based writer Gwen Cummings knows that she drinks a lot, doesn't believe it's a problem, and if she finally decides that it is that she could stop drinking without issue. She and her live-in boyfriend Jasper fuel each other's hyperactivity with this excessive alcohol consumption, "a normal life" which is not in either's vocabulary for themselves. Between Gwen and her older straight-laced sister Lily, Gwen more closely resembles who was their larger than life mother, who was also an addict and who died when they were children. Lily believes that Gwen's alcohol consumption makes her a difficult if not impossible person to love. While Gwen is in a drunken stupor at Lily's wedding, Gwen causes one issue after another, ruining the day for Lily. Gwen is forced to examine her drinking with the culmination of bad events she caused at the wedding, leading to her being court ordered to enter into rehab for twenty-eight days, which is only marginally more tolerable an idea to her than the alternative, which is jail. For Gwen to make any progress, she has to acknowledge that she has a problem which requires the support during those twenty-eight days not only of the facility's staff, but also the other patients, each who is going through his/her own issue with respect to the demons of addiction. If she does eventually acknowledge the problem, she will also have to reconcile the events of her life with Lily, and come to the realization that a life with Jasper is not in her best interest if she has any chance of surviving outside of the facility after those twenty-eight days.

Where to watch 28 Days