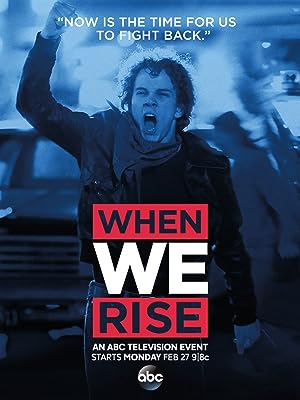 How to Watch When We Rise Online in Australia

The cast of When We Rise

What is When We Rise about?

A dramatization of the real life San Francisco centered fight for LGBT rights from 1972 to 2015 is presented, the LGBT community which arguably has had the most numerous organized campaigns against them of any minority group to suppress those rights in the United States during that time period. It focuses on the advocacy and other supportive work of four individuals, Cleve Jones, Roma Guy, Diane Jones and Ken Jones, whose experiences focus on different aspects of the issue. Cleve's story focuses primarily on the political and legislative fight for gay and ultimately LGBT rights. Roma's story focuses primarily on her fight for women's rights, especially safe places for women, within that where she as a lesbian fits, ultimately a fight for universal health care in San Francisco, and her personal relationships particularly with Diane. Beyond that relationship with Roma, Diane's story focuses on her work as a nurse in caring for AIDS patients, and her want as a lesbian to have a child. And Ken's story focuses on his search for the LGBT community's place within organized religion, and his longtime relationship with child welfare worker Richard, who hid behind a heterosexual marriage to protect his livelihood. Key events and the LGBT community reaction to these events in this collective fight are presented, such as the Equal Rights Amendment movement, the push to get gay Harvey Milk elected to San Francisco public office (he who would be the first openly homosexual person to hold public office in the US), the vote on Proposition 6 in California in conjunction with singer and Florida orange juice spokesperson Anita Bryant's anti-gay crusade, the murders of Milk and San Francisco mayor George Moscone, the AIDS crisis, the AIDS memorial quilt which was not supported by the entire gay community, the disillusionment with President Bill Clinton's administration with "Don't Ask, Don't Tell" and the Defense of Marriage Act (DOMA) enacted under his watch, and the vote on Proposition 8 in California which ultimately led to a fight at the United States Supreme Court for complete civil rights for the LGBT community throughout the nation.

Where to watch When We Rise

When We Rise Trailer

Watch When We Rise