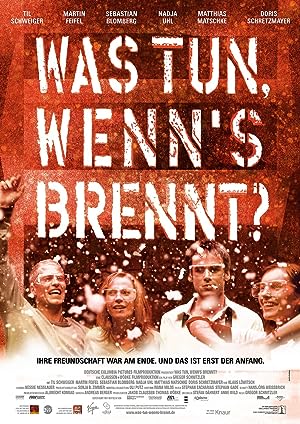 The cast of What to Do in Case of Fire

What is What to Do in Case of Fire about?

What To Do In Case of Fire? tells the humorous and touching story of six former creative anarchists who lived as house squatters in Berlin during its heyday in the 80s when Berlin was still an island in the middle of the former eastern Germany. At the end of the 80s they went their separate ways with the exception of Tim and Hotte, who have remained true to their ideals and continue to fight the issues they did as a group. In 2000, with Berlin as Germany's new capital, an event happens forcing the group out of existential reason to reunite and, ultimately, come to grips with the reason they separated 12 years ago.

Where to watch What to Do in Case of Fire

What to Do in Case of Fire Trailer

More Action movies like What to Do in Case of Fire