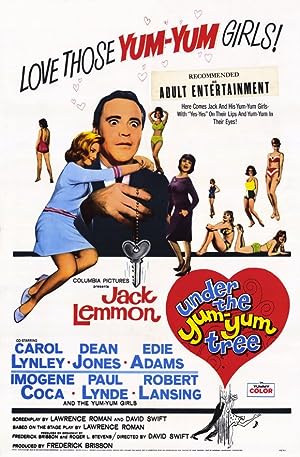 The cast of Under the Yum Yum Tree

What is Under the Yum Yum Tree about?

Hogan owns and operates the Centaur Apartment complex. He rents the units to young women only at less than half their market value in order to spy on them lasciviously and seduce them. After Hogan's latest conquest, Dr. Irene Wilson, a college professor, moves out when their romance goes sour, Hogan is more than happy to rent that apartment to blonde college student Robin Austin. Hogan is even happier when he learns Robin will have a slightly taller brunette roommate. What Hogan doesn't initially know is that Robin is Irene's student and niece, and that Robin's roommate will be her boyfriend, fellow college student David Manning. Not wanting to mistake lust for love, Robin convinced a sexually frustrated David - with who she has not yet had sex - to this platonic cohabitation arrangement solely to see if they are truly compatible as people before they decide to get married. When Hogan finds out about David and the arrangement, he tries subversively to thwart any romance between Robin and David, all the while trying to get Robin for himself. Once Irene finds out about Robin and David's arrangement, she tries first to ensure that they stick to the agreement and second that Hogan isn't trying any funny business with Robin, all in the name of protecting her niece. Irene, a professor of Education for Marriage, may be able to add some professional wisdom and first hand knowledge of Hogan to help the process along.

Where to watch Under the Yum Yum Tree

Under the Yum Yum Tree Trailer

More Comedy movies like Under the Yum Yum Tree

More Comedy tv shows like Under the Yum Yum Tree