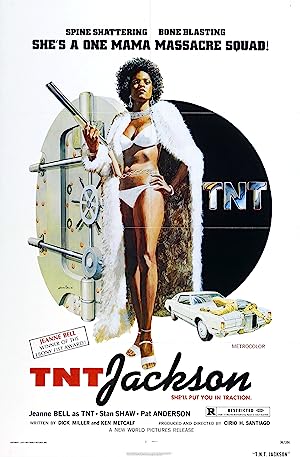 How to Watch TNT Jackson 1974 Online in Australia

The cast of TNT Jackson

What is TNT Jackson about?

Her name is Diana Jackson, but you can call her T.N.T. When T.N.T.'s brother is killed by ruthless drug dealers, the beautiful young karate expert goes to the most dangerous part of Chinatown to find the killer. In trouble with the law since she was 13, T.N.T. wants no help from the pigs; but she does befriend a Chinaman named Joe, whose impressive martial arts skills prove useful more than once. In her quest for the killer, she'll meet the white drug lord, Sid; Elaine, his bitchy girlfriend; his suspicious Chinese assistant, Ming; and Charlie, his handsome black assistant with criminal ambitions of his own. Before her search is over, she'll find herself making love to Charlie, trading insults with Elaine, and fighting criminals while nude and in the dark. Just call her T.N.T.

Where to watch TNT Jackson