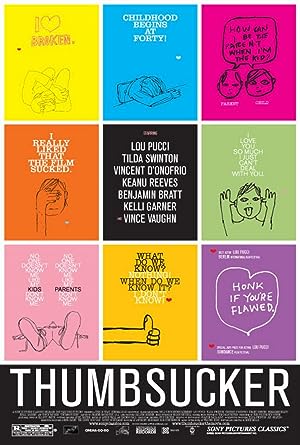 How to Watch Thumbsucker 2005 Online in Australia

The cast of Thumbsucker

What is Thumbsucker about?

Justin is a teenager boy, who has an oral obsession with his thumb. His mother seems to be a normal housekeeper, but she has her own obsessions as well, like a crush on a TV-star. The only person who's aware of Justin's problem is his father, manager in a store, but none of his advices seem to be working for Justin. The kid is signed up in a debate workshop, but the thing isn't going well, because he has his mind in a pretty classmate and, of course, in his thumb, affecting all the rest of his classes. So, Justin is a loner kid in the school, who prefers to lock himself in the bathroom and suck his thumb. Justin's dentist, a mystical-hippie person, will try to help to overcome his thumb problem, through the hypnosis. But the school's psychologist will diagnose Justin with the Attention Deficit Disorder, and will prescribe him some drugs. Suddenly, Justin's problem with his thumb will disappear, becoming an hyperactive genius, winning several debate contests and the admiration from his teacher. Nevertheless, more serious problems will come for Justin with his mother, his father and with a drug addiction.

Where to watch Thumbsucker