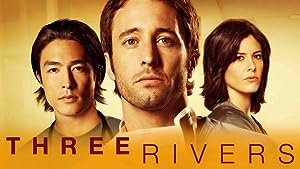 How to Watch Three Rivers Online in Australia

What is Three Rivers about?

Three Rivers is about the lives of organ donors, the doctors, and recipients of the organs at Three Rivers, a preeminent transplant hospital in Pittsburgh. Dr. Andy Yablonski is the leader of the team of surgeons: Dr. Miranda Foster, a woman with a reputation of being a rebel and who strives to live up to her father's legacy; Dr. David Lee, the surgeon that breaks all the ladies' hearts; Ryan Abbott, the inexperienced new transplant coordinator with a complex new way of transferring organs to the patients; Dr. Sophia Jordan, the head of organ surgery, and Pam Acosta, Dr. Andy Yablonski's operating assistant and best friend. These are the stories of organ surgeons and what it's like to be in a race against the clock to save lives.

Where to watch Three Rivers

Which streaming providers can you watch Three Rivers on

Here is the comprehensive list of streaming providers that will show Three Rivers in Australia. If Three Rivers will appear with other providers further down the line, this table will be updated.

The cast of Three Rivers

Three Rivers is a great Drama movie, we’ve selected several other movie options that we think you would like to stream if you have watched Three Rivers

Three Rivers is a great drama show, we’ve selected several other show options that we think you would like to stream if you have watched Three Rivers