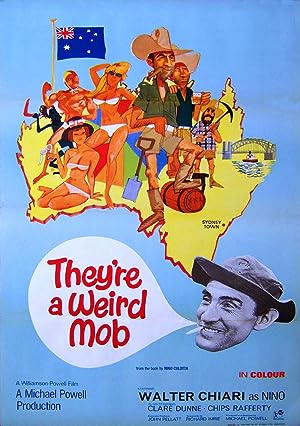 How to Watch They're a Weird Mob 1966 Online in Australia

The cast of They're a Weird Mob

What is They're a Weird Mob about?

Nino Culotta is an Italian immigrant who arrived in Australia with the promise of a job as a journalist on his cousin's magazine, only to find that when he gets there the magazine's folded, the cousins done a runner & the money his cousin sent for the fare was borrowed from the daughter of the boss of a local construction firm. So Nino tries to get a job & finishes up ... laying bricks. Nino works hard & makes friends with lots of locals, Nino & Kay argue a lot, Nino & Kay fall in love ... Kay takes Nino to meet 'Daddy' but daddy hates journalists, immigrants and bricklayers (he's now BOSS of a construction firm). Nino starts to win him over with his charm & determination to marry Kay.

Where to watch They're a Weird Mob

They're a Weird Mob Trailer

More Adventure tv shows like They're a Weird Mob