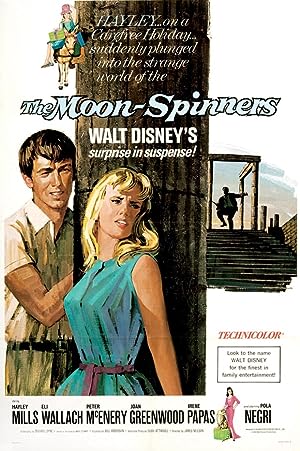 How to Watch The Moon-Spinners 1964 Online in Australia

The cast of The Moon-Spinners

What is The Moon-Spinners about?

British musicologist Frances Ferris and her late teen niece Nicky Ferris are traveling through Crete recording Greek folk songs for the BBC. In the usually quiet coastal town of Aghios Georgios, they manage to get a room at an inn called the Moon-Spinners, despite the people at the inn being busy preparing for a wedding, and no one there, except Alexis, the young teen son of the proprietress Sophia, he who is fond of spouting current popular Americanisms in his slightly broken English, seeming to want them there. Frances and Nicky learn from Alexis that the unwelcoming feeling is all because of his maternal Uncle Stratos, who has become a man suspicious of anyone ever since his recent return from London after being away for fifteen years. Beyond those there for the wedding, the only other guest at the inn is a young Englishman named Mark Camford, who they befriend. Nicky is too preoccupied with her own suspicions and mistrust of Stratos truly to see that there is something more sinister in the feelings between Stratos and Mark. Although they don't say anything to each other directly on the matter, Stratos knows why Mark is in Aghios Georgios and is always skin diving in the nearby Bay of Dolphins, and Mark knows that Stratos and by association his other nephew Lambis will be after him if he gets too close to what they have hidden in the bay before their intended method of disposal. By getting close to Mark, Nicky may unwittingly get caught up in what is the very dangerous and potentially life threatening game of cat-and-mouse between Stratos and Mark.

Where to watch The Moon-Spinners