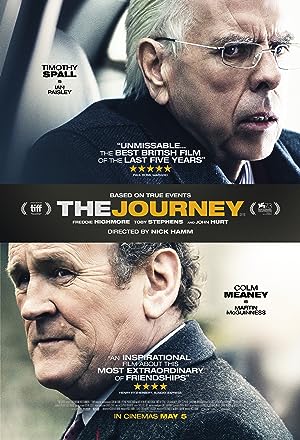 How to Watch The Journey 2016 Online in Australia

The cast of The Journey

What is The Journey about?

In 2006, Northern Ireland's bloody Troubles had dragged on for decades. Now with the growing threat of a new generation inspired by the 9/11 attacks to escalate the conflict to new levels of destruction, both the Catholic Republican and the Protestant Unionist sides are finally persuaded to seriously explore a peace agreement at UK Prime Minister Tony Blair's urging. Unfortunately, the principle negotiators, firebrand Democratic Unionist Party leader Ian Paisley and Sinn Fein politician Martin McGuinness, are decades-long implacable enemies. However with talks about to start, Paisley has his wedding anniversary that he is determined to attend at home, and McGuinness decides he must accompany his enemy to prevent him from being persuaded to abandon this chance for peace. With the Prime Minister and his MI-5 staff nervously watching from secret cameras, the two foes undertake a journey together in which they bridge the seemingly unbridgeable and change the course of history.

Where to watch The Journey