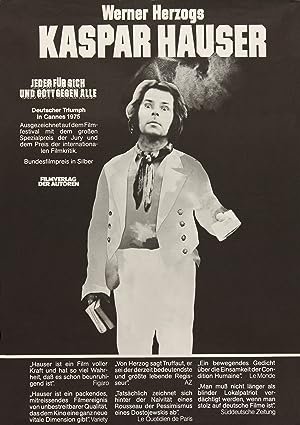 What is The Enigma of Kaspar Hauser about?

Herzog's film is based upon the true and mysterious story of Kaspar Hauser, a young man who suddenly appeared in Nuremberg in 1828, barely able to talk or walk, and bearing a strange note; he later explained that he had been held captive in a dungeon of some sort for his entire life that he could remember, and only recently was he released, for reasons unknown. His benefactor attempts to integrate him into society, with intriguing results.

Where to watch The Enigma of Kaspar Hauser

The cast of The Enigma of Kaspar Hauser

The Enigma of Kaspar Hauser Trailer

More Biography movies like The Enigma of Kaspar Hauser

More biography tv shows like The Enigma of Kaspar Hauser

Watch The Enigma of Kaspar Hauser