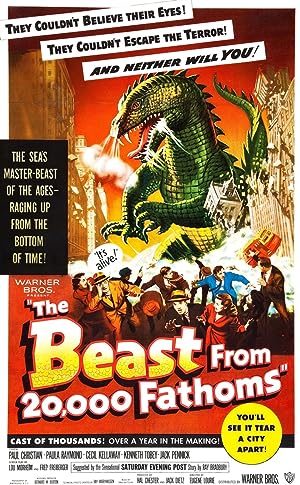 As a result of an arctic nuclear test, a carnivorous dinosaur thaws out and starts making its way down the east coast of North America. Professor Tom Nesbitt, only witness to the beast's existence, is not believed, even when he identifies it as a "rhedosaurus" to paleontologist Thurgood Elson. All doubts disappear, however, when Elson is swallowed whole during an oceanic bathysphere excursion to search for the creature. Soon thereafter the rhedosaurus emerges from the sea and lays waste to Manhattan Island until Nesbitt comes up with a plan to try to stop the seemingly indestructible beast.

Where to watch The Beast from 20,000 Fathoms

The Beast from 20,000 Fathoms Trailer

More Horror tv shows like The Beast from 20,000 Fathoms